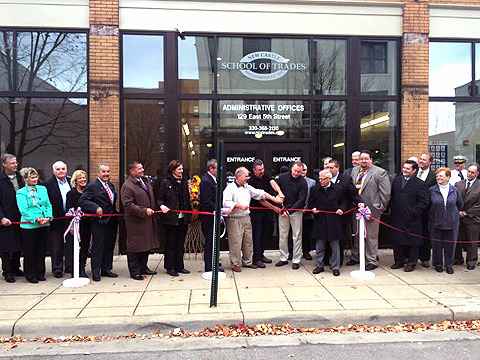 On Friday, November 11, 2016, hundreds gathered at the intersection of East Fifth and Washington Streets in downtown East Liverpool for the New Castle School of Trades Ribbon Cutting Ceremony, which has been five years in the making.

The public got its first look at the $7.9 million project that renovated two retail buildings that formerly housed the Ogilvie’s Department Store and Woolworth’s 5&10, turning them into the latest addition to East Liverpool’s education corridor.

New Castle School of Trades is a vocational school with successful campuses in Western Pennsylvania.  Their new location in downtown East Liverpool will provide job-ready training to thousands each year while revitalizing the downtown area.