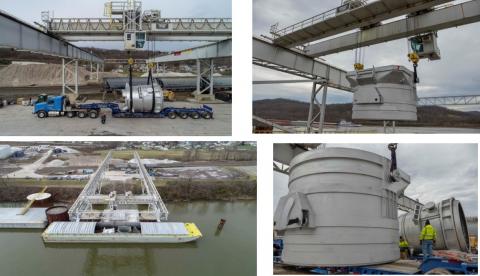 One of the largest loads unloaded at the Wellsville Intermodal Facility occurred in January 2019. The Ohio River facility offloaded two ladles – one weighing 83,775 pounds and the other weighing 79,366 pounds, after they arrived from China where they were made. Specially designed slings made of nylon wrapped in Kevlar fabric were used to lift the robust pieces off the barge. The ladles were later loaded onto flatbed trucks bound for the Timken Company in Akron, Ohio. The ladles took approximately two months to reach New Orleans through the Panama Canal. The vessel carrying the ladles took 21 days to reach the Wellsville Intermodal Facility.